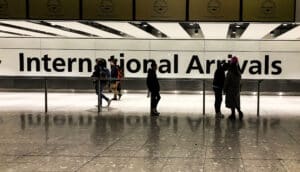 Holidaymakers arriving back in Britain will face queues of more than six hours after rules on international travel are relaxed from May 17, officials have warned.

Many passengers returning to the UK’s biggest airports already experience significant delays even though all non-essential travel is banned, a boss at Heathrow said yesterday. Chris Garton, chief solutions officer, said that delays at border control were “well in excess of two hours and up to six” despite passenger numbers being a fraction of normal levels. He cautioned this was likely to worsen with the resumption of international leisure travel.

The Home Office has hired the private company Mitie to carry out up to 10,000 home visits every day to check that individuals are complying with strict quarantine rules, compared with 1,000 visits per day at present. The contract will be worth up to £90 million.

Garton told the Commons transport select committee that queues at border control were lengthy because of strict paperwork checks. Some passengers in recent days had been made to wait so long that scuffles had broken out and the police have been called, he said.

Bottlenecks have been caused because of new “100 per cent checking” of arrivals’ paperwork, including their passenger locator form and proof of a negative coronavirus test. Passengers are unable to use e-passport gates because of the strict rules. “The airport was never built to have so many people held up,” Garton said. “The situation is becoming untenable. We want to see that bottleneck removed as quickly as possible. It will become a much bigger problem after May 17.”

At present Heathrow has between 10,000 and 15,000 arrivals a day — 10 to 15 per cent of pre-pandemic numbers. Robert Courts, the aviation minister, said the length of queues was a “critical matter” and that a group was being established with the Home Office and industry to look at “operationalising of the border”. He also pledged to simplify the passenger locator form, which was introduced last summer.

The Home Office is using the Mitie contract to increase compliance with quarantine rules. All passengers arriving from “amber” countries — those where the Covid risk is moderately high — are required to self-isolate for ten days. Fixed-penalty notices starting at £1,000 and increasing to £10,000 for repeat offences will be issued to those breaking the rules.

At present NHS Test and Trace staff call people in quarantine every day but instruct the police to carry out home visits only if they suspect someone is breaking the rules.

When restrictions are relaxed, arrivals from “red list” countries will have to enter quarantine in a hotel. People returning from “green” countries will not have to isolate themselves. The government is to confirm which countries fall into each category early next month.

EasyJet said it was preparing to increase the number of services after May 17. Tour operators are preparing to add departures to countries on the green list but have criticised the delay in its publication. Greek officials said last night that arrivals from the European Union and five other countries, including the UK, will no longer be required to self-isolate from April 19.

Mark Tanzer, chief executive of Abta, the travel trade association, urged ministers to relax testing measures on arrivals from low-risk countries by replacing costly PCR tests with lateral flow tests. He said that “£60 is better than £120, but £60 per person is still a lot for a family to add to the cost of a holiday. The industry does not have the margins to swallow that.”

Lucy Moreton, of the Immigration Services Union, which represents frontline Border Force staff, said: “ISU members are deeply concerned at the delays currently being experienced on entry to the UK. This does nothing to promote the Covid security of either the travellers or the staff.”

The prime minister’s official spokesman said: “Border Force are completing thorough checks of every arriving passenger, helping to determine what quarantine measures they need to follow to keep the UK public safe. That’s the approach the public would expect.”