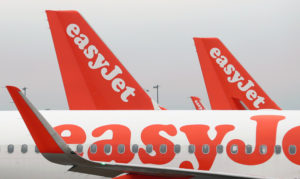 Easyjet today said it expects passenger numbers to pick up from late May after continued lockdown measures sparked a hefty loss for the first half of the year.

The budget airline forecast capacity to hit 20 per cent of 2019 levels in the third quarter, with an increase from late May onwards.

It said it was ready to ramp up or wind down capacity depending on the vaccine rollout in the UK and Europe and travel restrictions.

It came as Easyjet said it would report a pre-tax loss of between £690m and £730m for the six months to the end of March.

The company said the figure, which was slightly ahead of analyst forecasts, benefited from a major cost cutting programme that included job cuts and aircraft sales.

During the period Easyjet continued to be hit by lockdown measures, with passenger numbers crashing 89 per cent to 4.1m, representing just 14 per cent of the levels seen in the first half 2019.

Easyjet said it reduced its cash burn roughly 59 per cent to £845m in the first half, driven by reduced capacity and cost cutting.

At the end of March the group had unrestricted access to roughly £2.9bn in cash, having raised £5.5bn from emergency loans and shareholders since the start of the pandemic.

“Easyjet has maintained a disciplined approach to flying during the first half of our financial year, resulting in a first half loss and cash burn better than expectations,” said chief executive Johan Lundgren.

“We continue to have access to significant levels of liquidity alongside easyJet’s major cost-out programme which continues to deliver ongoing cost and efficiency benefits. All of this positions us well to lead the recovery.”