AUTO SALES in March surged by almost 88% compared with a year earlier as the industry recovers from the impact of the strict lockdown implemented last year.

The auto industry sold 20,702 vehicles in March compared with just 11,029 in the same month last year, a joint report from the Chamber of Automotive Manufacturers of the Philippines, Inc. (CAMPI) and Truck Manufacturers Association (TMA) released on Tuesday showed.

Vehicle sales in March 2020 were severely affected by closure of nearly all businesses after the government placed Luzon under an enhanced community quarantine to curb the coronavirus outbreak. 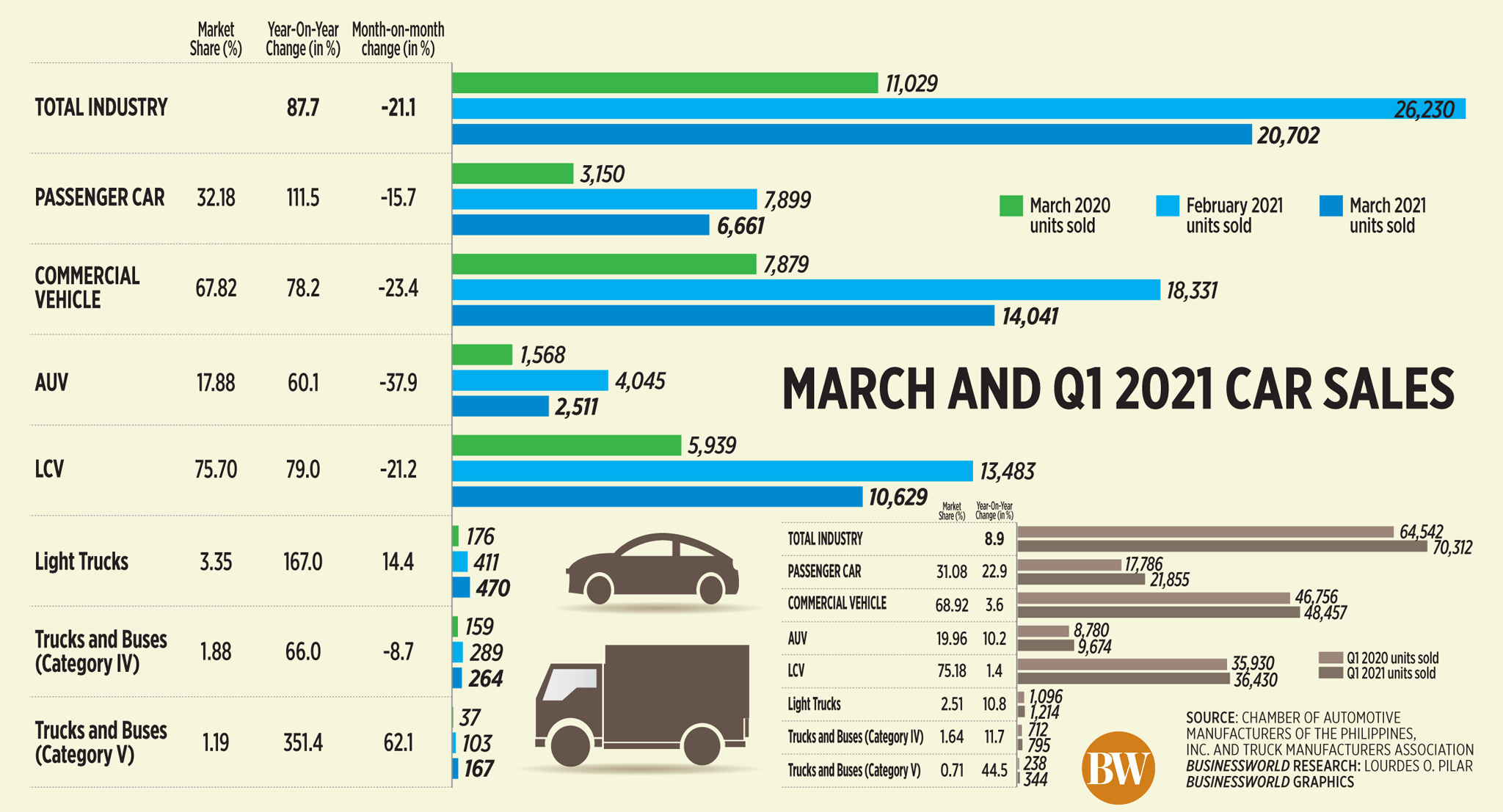 Month on month, car sales also slumped by 21.1%, which the industry attributed to the imposition of provisional safeguard duties on imports and the renewed lockdown restrictions.

The Department of Trade and Industry (DTI) imposed 200-day provisional safeguard duties on imported cars to protect local jobs after it found a link between a decline in local industry employment and an import surge, based on a petition from an auto parts labor group. Car companies have started collecting deposits for imported cars while the Tariff Commission conducts its own investigation.

“The auto industry felt the slowdown in sales due to the reluctance of buyers with the additional deposit for some imported vehicles because of the provisional safeguard duty. The lockdown also forced dealers to close operations that badly hit the already struggling auto industry,” CAMPI President Rommel R. Gutierrez said in a statement.

The stricter lockdown for Metro Manila and nearby regions was put in place from March 29 to April 11.

For the first quarter, auto sales went up 8.9% to 70,312 units compared with the same period last year.

Passenger vehicle sales, on the other hand, more than doubled to 6,661 units.

Mr. Gutierrez in a recent interview said that he expects the car industry to recover to pre-pandemic sales as late as 2023. Recovery would be achievable, he said, if there are certainties in the market, consistent government policies, and widespread inoculation against coronavirus disease 2019 (COVID-19).

The best-case scenario for the industry in 2021, he said, is a 30-35% sales growth, but the provisional duties could lower growth to 20-25% compared with last year’s figure.

The Safeguard Measures Act or Republic Act No. 8800 allows domestic producers to ask the government to conduct an investigation into their import competitors if they claim to have been injured by excessive imports. — Jenina P. Ibañez