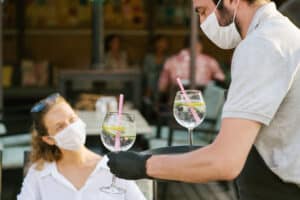 Retail and hospitality industry leaders have warned that the use of vaccine passports poses legal, moral and enforcement problems for businesses and frontline staff.

Boris Johnson suggested last week that once all adults had been offered a jab, pubs and other venues could demand to see Covid certificates from customers before allowing them entry. While no decision has been made, an update on the idea is due this month and a government review is set for June.

However, at a webinar hosted by the CBI yesterday, sector bosses argued against their introduction. Matthew Fell, the CBI’s chief UK policy director, said that such passports were a legal, employee-relations and reputational “minefield” and posed a big “moral choice”.

The industry was split over the idea, he said, with many businesses keen for a speedy return to normal, while others wanted fewer restrictive measures in place. Complaints from civil liberties campaigners that the passports represent a slide to authoritarianism also have fuelled calls to reject the idea.

Kate Nicholls, chief executive of UK Hospitality, the trade body, argued that certificates were unnecessary, saying: “Fundamentally, the vaccine should be our means to an end. We’ve got most of the population vaccinated, cases are falling, we shouldn’t need a passport to go to get a pint or to pop out for coffee.

“What we’re really concerned about is that the government appears to be moving towards linking acceptance of Covid certification with removing social distancing controls. Fundamentally our businesses cannot survive with those social distancing controls in place, economically we need to lift them.” However, she said that international travel and big events were “two areas where we think certification could work”.