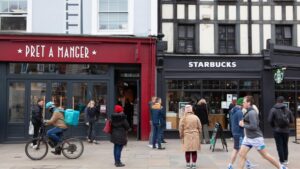 Household and business confidence has rebounded to levels not seen since the start of the pandemic thanks to the rapid deployment of Covid-19 vaccines.

The improving sentiment will raise hopes that the economy is poised for a robust recovery when restrictions are largely phased out in the summer.

Consumer confidence hit 105.4 last month, according to an index compiled by the Centre for Economics and Business Research and YouGov. That compared with 103.4 the previous month and is the highest since February last year. Any score above 100 means more consumers are confident than not.

The figures suggest that households are regaining their verve after a turbulent year in which the economy shrank by almost 10 per cent and millions of people were forced to stop working.

Many economists predict that with savings at elevated levels, there is significant pent-up demand ready to be unleashed once the economy reopens.

The success of Britain’s vaccination programme means the country should be free of almost all restrictions by the summer. However, other economists have cautioned that the surplus savings are largely in the hands of a relatively small number of affluent households, limiting a broad-based recovery.

“The latest rise in the consumer confidence index underlines the resilience of households throughout this third national lockdown,” Kay Neufeld, head of forecasting at the Centre for Economics and Business Research, said.

“With a road map for the gradual reopening of the economy now published, we expect the positive consumer sentiment to further aid in the recovery over the coming months.”

The rebound in consumer confidence was driven by greater optimism about the prospects for businesses. The sub-index for business activity rose by a record 5.4 points to 124. This fed through into greater confidence about the jobs market, with the index for job security over the coming year rising by 0.9 points to 112.2.

The government’s unprecedented intervention in the economy has helped to protect jobs and household finances. Although they are still pessimistic, respondents said that they felt more hopeful about the state of their finances over the coming year, with the index rising by 0.7 points to 97.2.

A separate survey by the auditor BDO showed that confidence in the services sector has hit a 12-month high on the back of the vaccination programme. The surge in its optimism index, which measures how bosses view their company’s and the economy’s prospects, suggests many businesses had been planning a return to normality before the government revealed its lockdown road map.

BDO said that renewed confidence was echoed in the chancellor’s budget speech in which he hailed “light at the end of the tunnel” for a post-pandemic recovery. It said confidence was expected to be bolstered further by the continuation of Rishi Sunak’s expansionary fiscal stance.

Confidence in the manufacturing sector fell by 0.27 points to 83.99. Any optimism from the vaccination rollout was offset by Brexit border tensions.

On jobs the report showed early signs of stabilisation, with the first increase in BDO’s employment index in four months. The rise from 107.64 to 107.68 staved off concerns of an immediate increase in unemployment.

Kaley Crossthwaite, partner at BDO, said: “The speed of the vaccine rollout . . . has given businesses a much-needed shot of relief. With business lifelines extended in the shape of the prolonged furlough scheme, and an extra dose of support provided to hospitality via extensions in business rates relief and the VAT cut to 5 per cent . . . this optimism can be sustained as we gradually emerge from the depths of lockdown.”