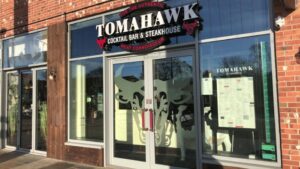 Restaurant staff at the Tomahawk Steakhouse chain have been asked to lend the business a tenth of their wages in order to help it through the latest lockdown.

The chain, which operates 12 venues in Yorkshire, the north-east of England and London, wants furloughed staff to pay for their own monthly national insurance and pension payments by way of a “voluntary loan” to the company to help it plug a cashflow crunch.

“The company has a short-term cashflow issue and it now requires your help and support,” the restaurant told its 500 staff in a loan agreement letter. “We need to get reopened after the end of this lockdown.”

The chain said it had supported staff during the coronavirus crisis by placing them on the government’s furlough scheme, as opposed to making them redundant, and “now we respectfully ask, in these difficult times, for you to support us”.

The group, which has continued to employ staff and open new sites during the pandemic, including in London in December, said it anticipated employees would have to do this as a “voluntary loan” for “three to four months”.

The letter states: “Once the lockdown is eased sufficiently for the company to trade, repayment of the loan will start to occur and no further deductions will be made.”

The loan agreement letter estimates that the company will deduct approximately 10% of employees’ gross pay as a loan to cover national insurance contributions and pension payments.

Neil Derrick, a regional secretary at the GMB, said the loan scheme exploited a legal loophole and was an “outrageous abuse” of the government’s furlough scheme.

“It’s never been easier for businesses to access cheap money,” he said. “Yet Tomahawk is bullying its own young, low-paid staff to raise interest-free cash. Tomahawk needs to take a long hard look at its behaviour, and this legal loophole must be closed before other companies follow suit.

Howard Eggleston, who founded the company in 2017, defended the scheme, saying it had been given overwhelming support from staff.

“We have 500-odd staff and we have had 100% take-up on the offer to try to help the company through,” he told the Guardian. “It is a voluntary agreement, the word loan stipulates what it is, we will pay it all back. It gets us through a massive hump where we are struggling to keep going.

“To be honest, I was trying to keep everyone in a job. The easier option would not have been to do that and I decided that was the absolute wrong thing to do. At the end of the day, I did what I thought was right at the time to keep everyone getting money and not being stuck with nothing.”