THE COUNTRY’S biggest banks lent less to households and firms in the fourth quarter of 2020, as profits fell and soured loans increased amid the coronavirus pandemic.

The latest edition of BusinessWorld‘s quarterly banking report showed the aggregate loans of 46 universal and commercial banks (U/KBs) contracted by 3.96% year on year to P9.582 trillion in the fourth quarter, more than the 0.74% decline in the preceding quarter, as banks remained risk averse.

The latest reading was the largest since the fourth quarter of 2003 when loans lent by U/KBs went down by 4.17%. Moreover, this was only the second decline in almost 11 years following the slump in the previous quarter. 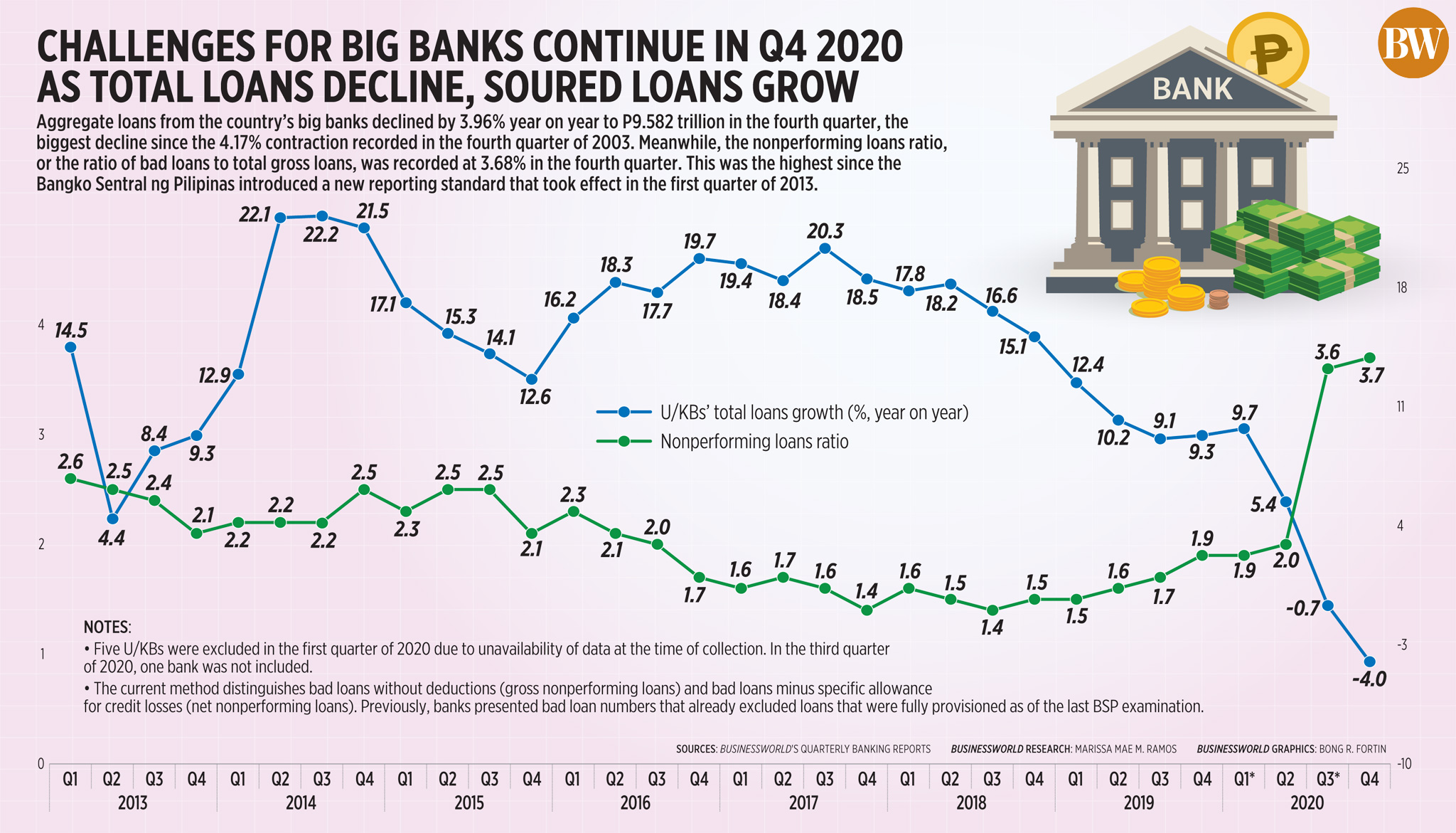 Profitability likewise suffered as the median return on equity (RoE) further declined to 3.66% from 4.13% in the third quarter of 2020 and 6.75% in the fourth quarter of 2019. RoE — the ratio of a bank’s net profit to shareholder equity — measures the amount that shareholders make on every peso they invest in a company.

BDO also has the most loans issued with P2.191 trillion, followed by the Bank of the Philippine Islands with P1.401 trillion and Metrobank with P1.222 trillion.

Among banks with assets of at least P100 billion, the state-run Development Bank of the Philippines (DBP) posted the fastest year-on-year asset growth with 36.69%. Asia United Bank (AUB) and Bank of Commerce came in next with 19.79% and 17.57%, respectively.

DBP likewise had the fastest year-on-year loan expansion of 19.75%, followed by Robinsons Bank Corp. and Rizal Commercial Banking Corp. with 7.67% and 3.81%, respectively.

BDO had the most deposits with P2.611 trillion, followed by LANDBANK with P2.093 trillion and Metrobank with P1.798 trillion.

Meanwhile, DBP posted the quickest deposit growth with 47.4%, with AUB and Bank of Commerce at second and third places with 22.41% and 20.39%, respectively.

BIG BAD LOANS
Bad loans, also known as nonperforming loans, grew by 7.65% in the fourth quarter to P308.832 billion from P286.877 in the preceding quarter. The fourth-quarter figure was almost double the P156.527 billion worth of bad loans posted in the same period in 2019.

Prior to the change, banks presented bad loan numbers that already excluded loans that were fully provisioned as of the last BSP examination. The current method does not allow this, and distinguishes bad loans without deductions (gross nonperforming loans, which are used in this report) and bad loans minus specific allowance for credit losses (net nonperforming loans).

Relative to total assets, foreclosed real and other properties are smaller at 0.28% in the fourth quarter from 0.29% in the previous quarter.

This brought the big banks’ bad loan coverage ratio, which is the ratio of the total loan loss reserves to gross nonperforming loans, to 104.45% from 102.76% in the third quarter, but still lower compared with the previous year’s 108.89%.

Big banks’ ability to absorb losses from risk-weighted assets edged down in the fourth quarter as their median capital adequacy ratio settled at 20.14% from 21.02% in the preceding quarter.

Still, the ratio remained well above the regulatory minimum of 10% set by the BSP as well as the international minimum standard of 8%.

BusinessWorld Research has been tracking the financial performance of the country’s big banks on a quarterly basis since the late 1980s using banks’ published statements.

The full version of BusinessWorld‘s quarterly banking report will soon be available for download on www.bworldonline.com.