HEADLINE INFLATION is likely to have breached the central bank’s target for a second straight month in February, as food and fuel prices remain elevated, according to economists.

A BusinessWorld poll of 16 analysts last week yielded a median estimate of 4.8%, near the upper end of the 4.3% to 5.1% estimate range given by the Bangko Sentral ng Pilipinas (BSP) but beyond the 2-4% annual target.

If realized, the median estimate will be even quicker than the 4.2% in January and the 2.6% a year earlier. It would also be the quickest since 5.1% print in December 2018. 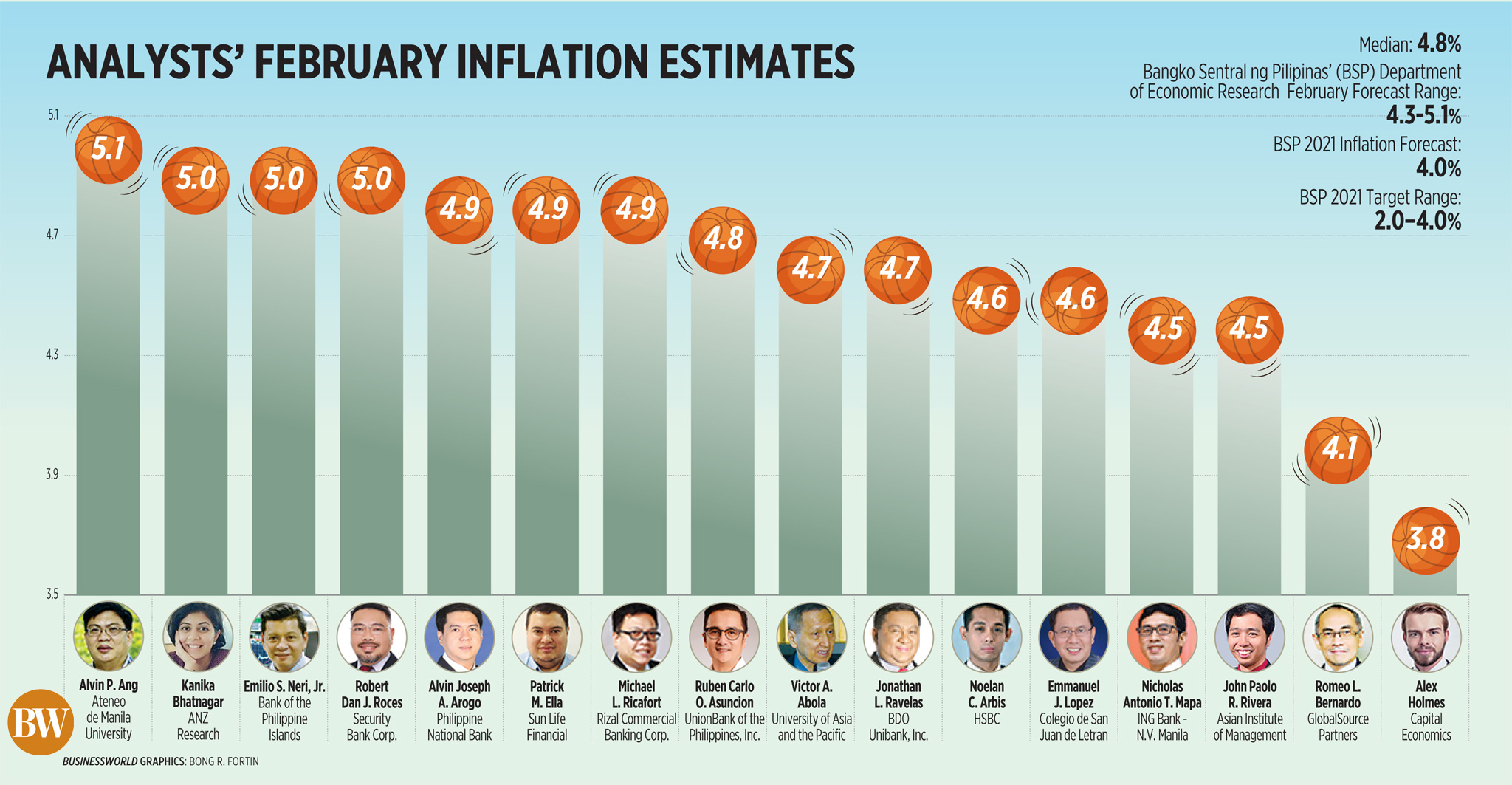 Bank of the Philippine Islands Lead Economist Emilio S. Neri, Jr. said a quicker rise in the consumer price index was expected in February as the price of household staples like meat and fish continued to accelerate.

This despite a government-imposed 60-day price ceiling on some pork and chicken products, and plans to allow more pork imports in order to temper the price spikes caused by the African Swine Fever outbreak. On the ground, however, some vendors have decided not to sell products citing the low profits.

“Importations may help mitigate the challenges in the near term but could cripple an already struggling livestock sector,” he said, noting that longer food security will better be ensured through capacity building and support programs for the industry.

“Oil firms have also continued to raise pump prices this month to reflect movement in the world oil market; crude futures on average have risen by 70% since October 2020,” Mr. Roces said.

Last month saw the prices of gasoline, kerosene and diesel prices increase by P3.05, P2.90 and P3.30, respectively, based on data from the Department of Energy.

In its rate-setting meeting on Feb. 11, the Monetary Board has raised its average inflation forecast this year to 4% from 3.2% previously. Officials said upside risks to inflation emanate from the recovery in oil prices as demand picks up with the easing of restriction measures around the world.

The Monetary Board is set to meet on March 25 for its second policy meeting this year.

Analysts said February inflation further strengthens the case for the central bank to retain its accommodative stance and to refrain from increasing the benchmark rates.

The country is currently under a negative real interest rate environment with the key policy rate at 2% and inflation at 4.2% as of January.

BSP Governor Benjamin E. Diokno has said they are likely to keep rates low until the economy has fully recovered and when unemployment returns to its pre-pandemic level. He noted raising interest rates will be “too early” as 2021 is seen as the country’s “recovery year” from the recession.

The low base effect from the collapse in global oil prices last year will cause a sharp rise in fuel and transport prices — a reason for the central bank to hold rates for the moment, Alex Holmes, economist at Capital Economics said.

“The [inflation] spike will be temporary, and we still expect rate cuts before the yearend,” he said.

Last year, the BSP slashed rates by a total of 200 basis points to provide support to the virus stricken economy. This brought down the overnight reverse repurchase, lending, and deposit rates to record lows of 2%, 2.5%, and 1.5%, respectively.