APPROVED foreign direct investment (FDI) pledges slumped to the worst level in three years in 2020 amid the coronavirus pandemic, data released by the Philippine Statistics Authority (PSA) on Wednesday showed.

The PSA said foreign investment pledges approved by the country’s investment promotion agencies for the full year hit P112.12 billion, down by 71.3% year on year. This was the lowest amount since the P105.75 billion worth of investments approved in 2017.

The full-year tally came after a lackluster performance in the fourth quarter, when approved investments plunged by 67.5% year on year to P36.48 billion from P112.11 billion a year earlier.

The United States was the top source of approved foreign investments last year with P35.37 billion, 2.6 times more than P13.48 billion in 2019. Investment commitments from the US accounted for 31.5% of the total.

The United Kingdom ranked third with P13.08 billion — almost five times more than its pledges in 2019.

PEZA contributed the biggest chunk of the foreign investment pledges with P59.73 billion, or 53.3% of last year’s total.

In the fourth quarter alone, the transportation and storage sector received the biggest portion of approved foreign investment pledges worth P14 billion, accounting for 38.4%. This was followed by manufacturing with commitments worth P10.37 billion or 28.4%, as well as real estate activities at P6.96 billion or 19.1%.

The bulk of the approved investments in the fourth quarter — 62.4% at P22.77 billion — will go to projects in the Cavite-Laguna-Batangas-Rizal-Quezon Region south of Metro Manila.

Assuming the projects materialize, foreign and local investments pledged during the period are expected to generate 35,414 jobs across industries, less than 55,946 projected jobs a year ago.

“Other countries may be more lucrative to invest in relative to us because of their pace in managing and containing the pandemic as well as seamlessly securing vaccines… There is some confidence in our economy but not as much as other economies,” Mr. Rivera said, citing last year’s economic performance metrics.

He said he expects approved and actual FDIs to rebound once confidence in the country recovers.

“This can be done by indicating a more stable post-pandemic recovery plan for the economy. We need to project that despite the pandemic, we are as competitive as other economies, particularly with our neighbors,” the economist said. — J.E.Hernandez 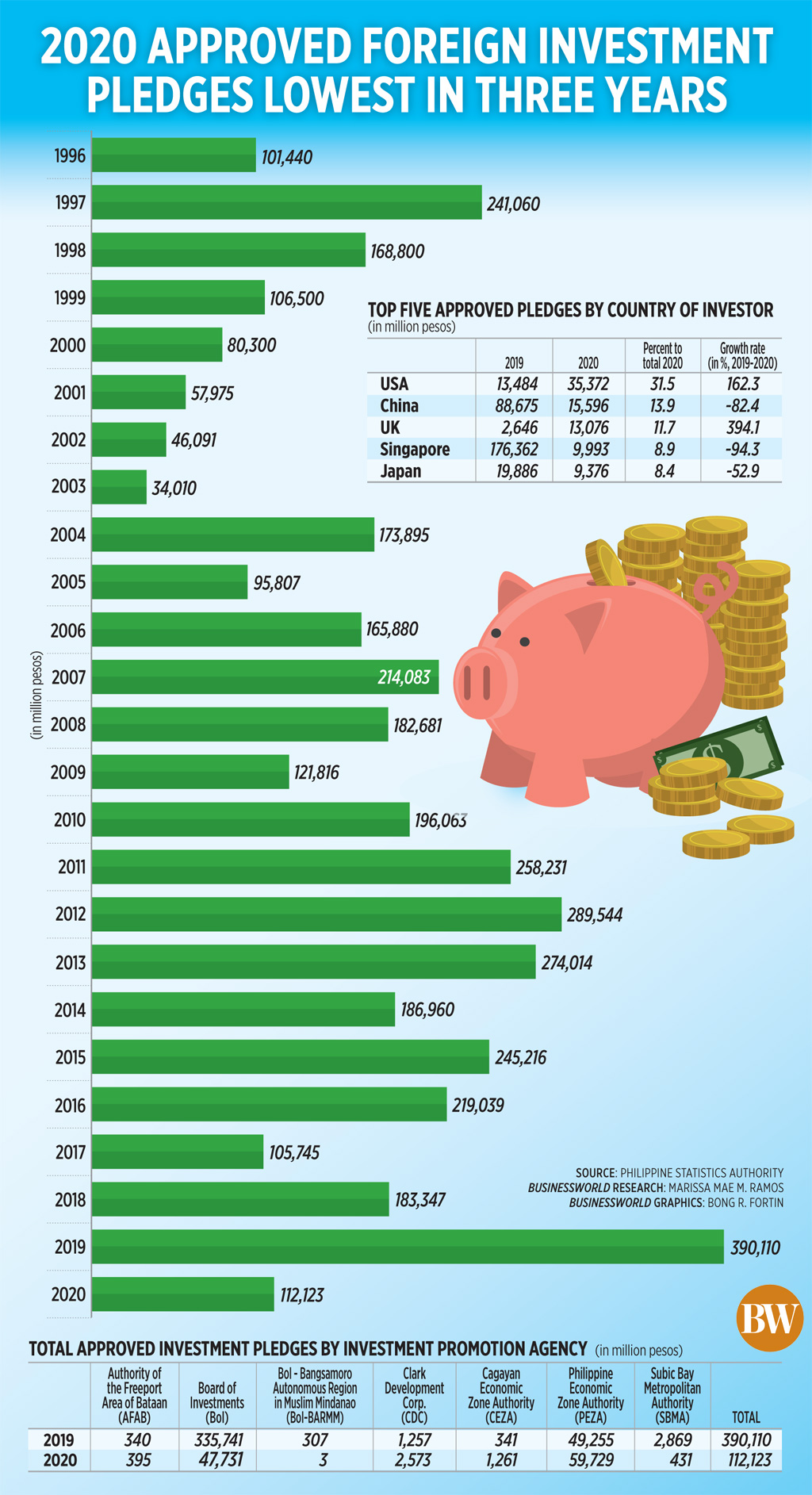