REMITTANCES slipped by 0.8% in 2020, the first annual contraction in two decades, as some overseas Filipino workers (OFWs) lost their jobs while others tightened their belts amid the pandemic.

Cash remittances coursed through banks stood at $29.903 billion last year, slightly lower than the record $30.133 billion in 2019, according to data released by the Bangko Sentral ng Pilipinas (BSP) on Monday.

Remittances saw its first annual contraction since the -0.3% seen in 2001 and the worst since the -18.3% logged in 1999. However, the decline was better than the 2% contraction forecast by the central bank for the full year.

“In peso terms, remittances have actually contracted by 4.8% despite OFWs struggling to find a way to send home more dollars to pay for fixed peso expenditures such as tuition or mortgage payments,” Mr. Mapa said in a note.

In 2019, the peso hovered beyond the P50-per-dollar level and even reached P52 a dollar. By 2020, the peso appreciated to reach the P48-a-dollar level, which means OFWs needed to send more to provide for their families during the crisis.

On the other hand, money sent home by OFWs in the United States, Singapore, Canada, Hong Kong, Qatar, South Korea, and Taiwan increased.

This difference showed the “disparate effects” of policies of fiscal support in host economies in relation to the ability of OFWs to continue supporting their families in the Philippines, Security Bank Corp. Chief Economist Robert Dan J. Roces said.

“For instance, the fiscal support injection in the US allowed OFWs based there to continue sending that contributed to it as the country with the largest source. Contrast this to other traditionally strong origin countries — such as Saudi Arabia — which faltered as lockdowns forced work stoppage and sent workers home,” Mr. Roces said in a text message.

BSP data showed the United States had a 39.9% share of total remittances in 2020. Inflows from the US, along with Saudi Arabia, Japan, United Kingdom, United Arab Emirates, Canada, Hong Kong, Qatar, and South Korea made up 78.6% of the total.

This year, the BSP projects cash remittance to grow by 4% on the back of an expected global economic recovery.

Mr. Mapa said remittances will see a “moderate growth this year” as the peso strengthens and more sea-based workers are deployed.

“With vaccination rollouts ongoing across the globe, job prospects may brighten for OFWs in the coming months which will be crucial in supporting sagging domestic incomes due to severe job losses and poor consumer confidence,” he said.

Latest data from the Department of Foreign Affairs showed more than 351,000 OFWs have already been repatriated since the outbreak in February last year. 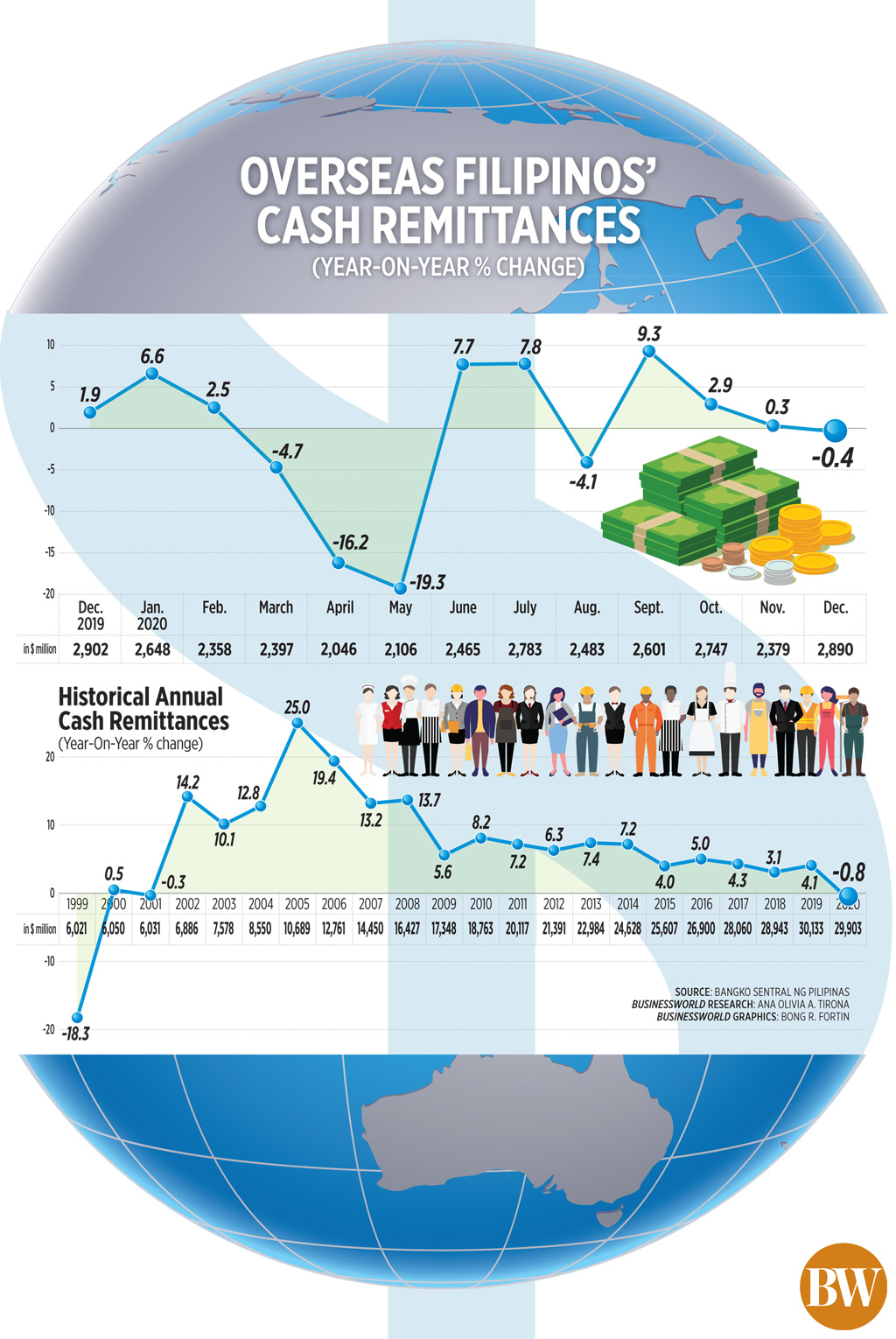