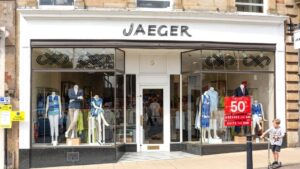 Marks & Spencer has bought Jaeger after the upmarket fashion brand’s collapse in the autumn.

The retailer is expected to buy only Jaeger’s intellectual property, which would allow it to sell Jaeger-branded goods on its website as a third-party brand. M&S did not disclose the amount paid, but it is understood to be about £5 million.

M&S said that it was in the final stages of agreeing the purchase of product and supporting marketing assets from the administrators of Jaeger Retail Limited and that it expected to complete the deal this month.

The agreement means that no store staff from Jaeger are expected to keep their jobs and all physical sites, already closed owing to lockdown restriction, are expected to stay shut permanently.

Jaeger, which operated 76 shops and employed 347 people before its collapse, was placed into administration alongside Peacocks, its sister retailer, in November by Philip Day, 55, their Dubai-based owner, who bought it in 2017. His stricken Edinburgh Woollen Mill group also included Austin Reed and Jacques Vert. Jaeger was founded in 1884 and in its heydey was worn by film stars including Marilyn Monroe and Audrey Hepburn. It is known for its classic British styles.

The move to buy up Jaeger fits with M&S’s new strategy of selling third-party brands, with existing tie-ups. In September the retailer formed an online partnership with Nobody’s Child and it also has collaborated with Ghost and most recently with Early Learning Centre. It is thought to be in the running for some of Sir Philip Green’s collapsed Arcadia Group brands, such as Topshop.

Last week at M&S’s Christmas trading update, Steve Rowe, 53, the chief executive, said: “M&S wants to build a curated set of brands and merchandise largely for our online business but also through filling some of that excess space we have in stores.

“We’ve got no intention of turning M&S into a department store at all. This is about finding and partnering with adjacent brands. Adjacent in terms of style, adjacent in terms of customer base that enhance the M&S offer and make it the place to go to for an online shop.”