FACTORY ACTIVITY in the Philippines further deteriorated in December, falling behind Southeast Asian peers that all saw an improvement, as ongoing lockdown restrictions and bad weather dampened production, IHS Markit said on Monday.

The IHS Markit Philippines Manufacturing Purchasing Managers’ Index (PMI) fell to 49.2 in December from 49.9 in November, moving further below the 50-neutral mark that separates expansion from contraction.

“Despite some positive signs of the sector moving towards a recovery in November, latest PMI data signalled that operating conditions across the Philippines manufacturing sector worsened in the final month of 2020. Firms registered a modest contraction in output volumes amid ongoing pandemic restrictions, implemented to curb the surge in coronavirus disease 2019 (COVID-19) cases,” IHS Markit said in a statement. 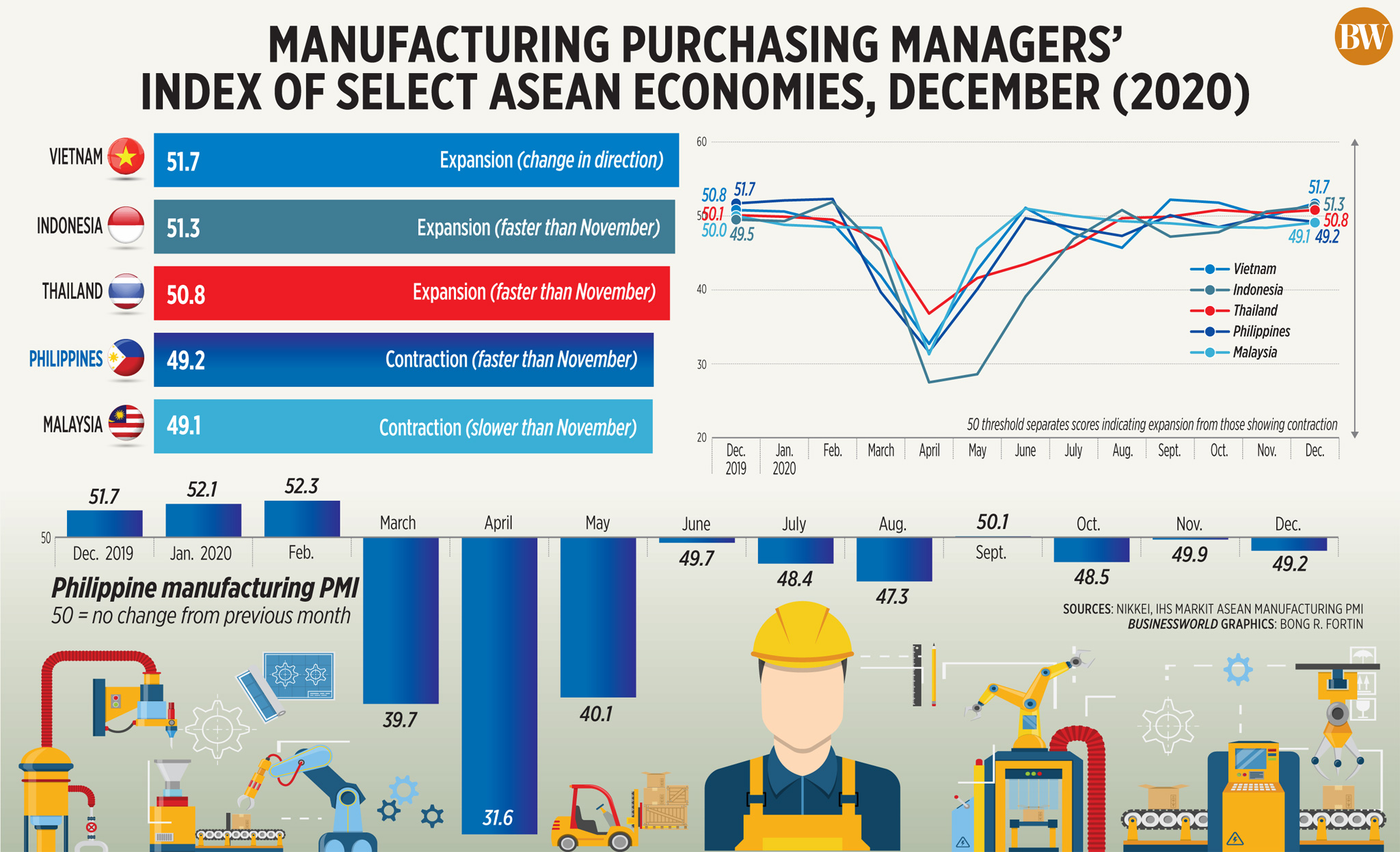 December saw the third straight month of contraction, with IHS Markit noting “the rate of decline was among the fastest in the series history.”

It attributed the deterioration in factory activity to the continued imposition of lockdown restrictions and bad weather in December. Metro Manila and nearby areas remained under a general community quarantine (GCQ).

Among Southeast Asian economies, the Philippines was the only one that reported deteriorating conditions in December. Vietnam topped the list with a PMI of 51.7, followed by Indonesia with 51.3 and Thailand with 50.8. Malaysia (49.1) ranked the lowest so far. Data for Myanmar was not yet available as of writing.

The PMI is the weighted average of five sub-indices: new orders (30%), output (25%), employment (20%), suppliers’ delivery times (25%) and stocks of purchases (10%). An overall reading above 50 signals expansion, while a reading below 50 denotes contraction.

In the Philippines, IHS Markit said new orders were mostly unchanged in December, with companies saying the quarantine restrictions weighed on domestic demand.

Demand from overseas continued to rise, with exports up for a fourth straight month. Firms surveyed noted a bigger demand for Filipino products in key export markets.

“The downturn in production, and muted demand conditions led firms to cut workforce numbers in the final month of 2020. Job shedding persisted at a strong rate which firms linked to restructuring efforts and voluntary resignations,” IHS Markit said.

As demand remained weak, factories had spare capacity that allowed them to reduce their backlog, the survey showed.

“A combination of material shortages, and COVID-19 restrictions contributed to another monthly deterioration in vendor performance. Supply chain pressures have been registered each month since August 2019, with the latest extension to lead times marked overall,” it added.

“New orders neared stability and sentiment recovered to levels seen before the start of the pandemic. At the same time, case numbers have moderated with expectations that restrictions will ease over the coming months. Although the latest overall sector contraction was only marginal, domestic demand remains challenging which may stymie progress on the lengthy road to recovery,” she said.

Input prices grew for the eight straight month as issues on supply chains persist due to bad weather conditions and ongoing mobility restrictions enforced by the government to curb the spread of COVID-19.

“Subsequently, selling prices rose as Filipino manufacturers chose to pass on part of the hike in costs to customers,” IHS Markit said.

For businesses, they remained optimistic for 2021, with the level of confidence reaching its highest since February last year, the month before the strict lockdown was imposed.

The level of optimism, however, was still below average given the uncertainties over the pandemic.

Robert Dan J. Roces, Security Bank Corp.’s chief economist, said the latest index meant the average PMI improved to 49.2 in the fourth quarter from the 48.6 average in the previous quarter, which could support further improvement in business conditions of factories in the country this year.

“The average reading suggests that we should expect a gradual growth recovery to have occurred in 4Q20 — albeit less contraction compared with 3Q — and very likely for 1Q21 as well,” Mr. Roces said in an e-mail on Monday.

“We do expect factory activity to pick up for the full year this year primarily from positive ripple effects from the vaccine that could cause some demand recovery. The challenge is to restore confidence in both businesses and consumers to lift the recovery further,” he added.