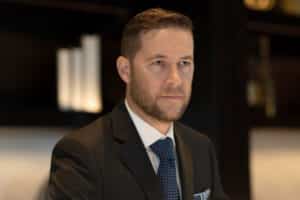 When faced with challenging decisions in times of high uncertainty, most leaders defer to considering the ‘traditional’ levers and metrics of business success; corporate strategy, risk management, marketing, finances; while ignoring the most essential element of any organisation – its people.

Jason English knows this all too well. With a corporate career spanning law enforcement, oil and gas services and technology, English leads, and has been led by some great, and some not so great leaders.

As Chief Ecosystem Officer of CG Tech, a United Kingdom-based holding company with subsidiaries in South Africa and the Middle East, the group, led by chairman Niall Carroll, takes a radically different approach than most companies. Having weathered the economic onslaught from the recent pandemic, English, a former peace corps officer, is fully aware of the trust and cooperation needed in navigating challenges.

“While a challenge, none of this is new to us. We’ve weathered storms before.”

What continues to get CG Tech and its subsidiaries through the economic challenge, English claims, is its people.

Hiring (and firing) in times of challenge

The trendy idea of “hire slow, fire fast” serves as a reminder of how most businesses consider the role of people within organisations. Flouting the rule, English is flatly against the idea that time plays a role in choosing a suitable hire, claiming instead that his most effective hires have taken the shortest time, and under challenging business environments.

While others might place skillsets and capabilities high on the importance ladder, English notes that character is the single most important trait in a new talent hire. The rest, he says, comes down to the Oros Effect.

It was in a conversation with his brother, following his acquisition of a small oil and gas services company, that the idea of the Oros Effect came to him as a question: with all the challenges of scaling a new business, how could he make sure to align the vision and mission of the company across an exponentially growing number of people?

Drawing on his collective learnings in a career stretching from the field to the C-suite in the oil and gas services sector, English and his team took Prommac, then a niche player, to an enviable position within the market, to a yearly revenue of over R500 million in just 7 short years. The success, claims English, wasn’t up to chance but instead, to a concerted effort to instil a culture within the organisation.

In his upcoming book ‘The Oros Effect’, English explores the role of people and culture within organisations, challenging another established dogma of Taylor’s scientific management that if it can’t be measured, it can’t be managed.

English offers an alternative, that an employee-centric environment that promotes a challenging and failure-tolerant environment is the prescription needed for organisations to solve the challenges of the present. The numbers, it would seem, are only part of the story.

As if to prove the point, English brings up ‘employee performance’ as a KPI that often ends up making things worse rather than better.

“People can be equally motivated by fear, or by purpose. Both will contribute to ‘performance’, making a measurable bottom line improvement – but only one is truly sustainable over the longer term – Jason English, Chief Ecosystem Officer, CG Tech

In a PWC survey, 79% of business leaders believe an organisation’s purpose is central to business success, yet 68% shared that purpose was not incorporated in strategic leadership decisions, choosing instead to focus on the numbers. With a lack of congruence at the leadership level, is it any wonder why most employees don’t take their leaders – or the organisations they work in – seriously?

How to effectively deploy a purpose-driven organisation

There are three areas organizations should focus on as they realign and deploy a purpose-driven organization: Engage, Develop, and Propel.

As it turns out, many organizations were barely able to engage employees during the first phase of the COVID-19 pandemic. As the pandemic continued, however, it became clear that the mindset, the needs, and the working conditions evolved to the point of necessitating more sophisticated approaches to employee engagement. Even before the pandemic, employee engagement was at an all-time low, leading to a host of cultural and commercial challenges for organizations.

The Oros Effect breaks employee engagement down into two parts. First, making sure the essential needs of employees are met – from physical safety and job security to mental wellbeing. Second is building social capital at every level – creating space and networks for employees and teams to connect and build relationships. Organizations that have already been building social capital are better positioned to weather uncertainty and emerging challenges.

In fast-moving and competitive industries, development of human capital often takes a backseat to other priorities. The reason for this is the perceived complexity and cost of developing talent. “Start with people, and you will unlock resilience and capabilities critical to survival and growth,” says English. Make sure that development programs spend equal times on mindset as they do on skillset. And development can happen anywhere – at a watercooler, a virtual town hall, or on a special project assignment.

Propeling employees to a higher purpose is possible by making them part of the bigger organisational vision. This is done through culture that brings people together with a vision and shared set of beliefs on the impact they want to create in the world. Not just for themselves, but for the whole ecosystem that the business operates in. Culture is what ties the Oros Effect together.

Jason English insists that the Oros Effect is no ‘kumbaya fake feel-good’ thing. Purpose-driven businesses are more ambitious and failure-tolerant, make faster and better decisions, inspire better innovation and most importantly, attract the best and most loyal talent. And yes, they produce better bottom-line outcomes.

“People are not numbers; they have thoughts, and emotions, and families to consider. The sooner we realise this, the sooner we can create companies and organisations that people are willing to sacrifice their time for.”