Technology experts at Reincubate saw an opportunity in the rise of remote-working video calls and developed the app, Camo, to improve the video quality of our webcam calls.

As part of this, they consulted the digital photography expert and author, Jeff Carlson, to reveal how we can look our best online.

It’s clear by now that COVID-19 has normalised remote working, but as part of this the importance of video calls has risen exponentially. While we’re all used to seeing the more casual sides of our colleagues (t-shirt and shorts, anyone?), poor webcam quality is slightly less forgivable.

Jeff Carlson, author of The Photographer’s Guide to Luminar 4 and Take Control of Your Digital Photos suggests “the product you’re creating is not the camera, the lens or a webcam’s clever industrial design. It’s the subject, you, which is just one part of the entire image they see. You want that image to convey quality, not convenience.”

But how can we improve how we look on video? We consulted Jeff Carlson for some top tips– here is what he had to say.

1. Improve the picture quality of your call

The better your camera, the higher quality your webcam calls will be. Most webcams (as well as currently being hard to get hold of and expensive), are subpar. A DSLR setup will give you the best picture, but will cost $1,500+. You can also use your iPhone’s amazing camera as a webcam, using the new app from Reincubate, Camo.

Jeff’s comments “The iPhone’s camera system features dedicated coprocessors for evaluating and adjusting the image in real time. Apple has put a tremendous amount of work into its imaging software as a way to compensate for the necessarily small camera sensors. Although it all works in service of creating stills and video, you get the same benefits when using the iPhone as a webcam.”

Aidan Fitzpatrick, CEO of Reincubate explains why the team created Camo, “Earlier this year our team moved to working remotely, and in video calls everyone looked pretty bad, irrespective of whether they were on built-in Mac webcams or third-party ones. Thus began my journey to build Camo: an iPhone has one of the world’s best cameras in it, so could we make it work as a webcam? Category-leading webcams are noticeably worse than an iPhone 7. This makes sense: six weeks of Apple’s R&D spend tops Logitech’s annual gross revenue.”

2. Place your camera at eye level

A video call will never quite be the same as a face-to-face conversation, but bringing your camera up to eye level is a good place to start. That can involve putting your laptop on a stand or pile of books, mounting a webcam to the top of your display screen, or even using a tripod to get the perfect position.

Jeff points out, “If the camera is looking down on you, you’ll appear minimized in the frame; if it’s looking up, you’re inviting people to focus on your chin, neck, or nostrils. Most important, positioning the camera off your eye level is a distraction. Look them in the eye, even if they’re miles or continents away.” 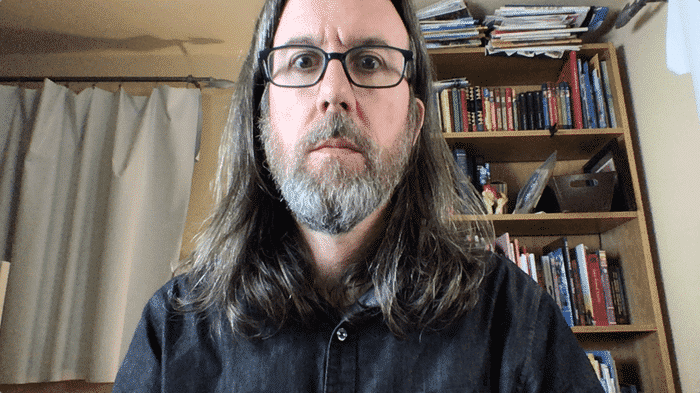 3. Make the most of natural lighting

Be aware of the lighting in the room and move yourself to face natural lighting if you can. Positioning the camera so any natural light is behind you takes the light away from your face, which can make it harder to see and read expressions on a call.

Jeff Carlson’s top tip: “If the light from outside is too harsh, diffuse it and create softer shadows by tacking up a white sheet or a stand-alone diffuser over the window.” 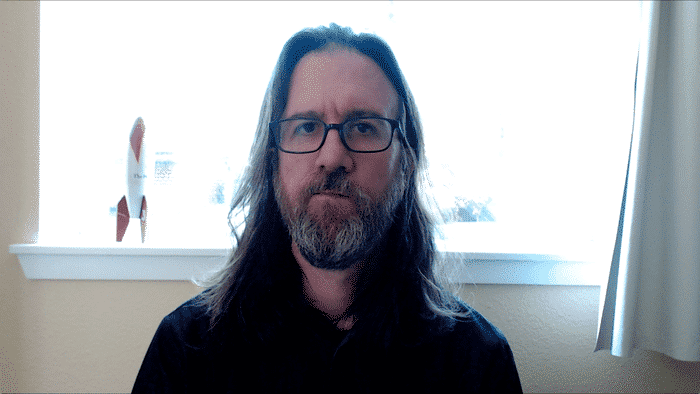 The downside to natural lighting is that you’re at the mercy of the elements: if it’s too bright you’ll have the sun in your eyes, if it’s too dark you won’t be well lit.

Jeff recommends adding supplementary lighting if you’re looking to really enhance your video calls. After all, it looks like remote working will be carrying on for quite some time.

“The light can be just as easy as a household or inexpensive work light. Angle the light so it’s bouncing off a wall or the ceiling, depending on your work area, which, again, diffuses the light and makes it more flattering.

Or, for a little money, use a softbox or a shoot-through umbrella with daylight bulbs (5500K temperature), or if space is tight, LED panels. Larger lights are better for distributing illumination– don’t be afraid to get them in close to you. Placement depends on the look you’re going after; start by positioning one at a 45-degree angle in front and to the side of you, which lights most of your face while retaining nice shadow detail.”

In some cases, a ring light may work best. LEDs are arranged in a circle, with space in the middle to put the camera’s lens and get direct illumination from the direction of the camera.

5. Centre yourself in the frame

Make sure you’re getting the right angle and that you’re using the frame effectively.

“You should aim for people to see your head and part of your torso, not all the space between your hair and the ceiling. Leave a little space above your head so it’s not cut off, but not enough that someone’s eyes are going to drift there.”

6. Be mindful of your backdrop

It’s not always easy to get the quiet space needed for video calls when working from home, but try as best you can to remove anything too distracting from your background.

“Get rid of clutter or anything that’s distracting or unprofessional, because you can bet that will be the second thing the viewers notice after they see you. (The Twitter account @RateMySkypeRoom is an amusing ongoing commentary on the environments people on television are connecting from.)”

A busy background as seen by a webcam

7. Make the most of virtual backgrounds

If you’re really struggling with finding a background that looks professional, try using a virtual background.

Jeff suggests: “Some apps can identify your presence in the scene and create a live mask that enables you to use an entirely different image to cover the background. While it’s a fun feature, the quality of the masking is still rudimentary, even with a green screen background that makes this sort of keying more accurate.”

8. Be aware of your audio settings

Our laptop webcams, cameras, and mobile phones all include microphones, but if it’s at all possible, use a separate microphone instead.

“That can be an inexpensive lavalier mic, a USB microphone, or a set of iPhone earbuds. You can also get wireless lavalier models if you’re moving around during a call, such as presenting at a whiteboard in the camera’s field of view.

The idea is to get the microphone closer to your mouth so it’s recording what you say, not other sounds or echoes in the room. If you type during meetings, mount the mic on an arm instead of resting it on the same surface as your keyboard.”

9. Be wary of video app add-ons

Video apps like Zoom include a ‘Touch up your appearance’ option in the Video settings. This applies a skin-smoothing filter to your face, but more often than not, the end result looks artificially blurry instead of smooth.

“Zoom also includes settings for suppressing persistent and intermittent background noise, and echo cancellation. They’re all set to Auto by default, but you can choose how aggressive or not the feature is.”

10. Be the best looking person in the virtual room

What’s important to remember about video calls at this point in time is that most people are new to what is, really, personal broadcasting. That means you can easily get an edge, just by adopting a few suggestions in this article. When your video and audio quality improves, people will take notice.