Google’s first smart speaker has finally got a much-needed upgrade in sound with the new Nest Audio.

The speaker replaces the Google Home and costs GBP89.99, fitting in between the GBP49 Nest Mini and GBP299 Google Home Max.

The design is completely different from the original Google Home. The outside of the Nest Audio is covered in a recycled plastic fabric – the same used on the recent Nest Mini. 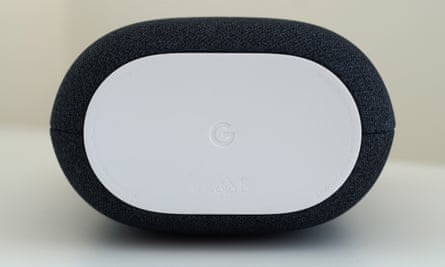 There is a mute switch for the microphones on the back and a port for the power plug but those are the only visible features. The front has four hidden LEDs that light up when you interact with the speaker, either talking to it or adjusting volume. The top has three touch-sensitive spots. Left and right corners turn the volume down or up respectively, while the middle of the top pauses or plays music.

While there’s a quick tutorial on how to use the controls in the Google Home app, which you need to set up the speaker, there are no visible markers on the speaker itself, so you will have to teach others how to control it. However, given this is a Google Assistant smart speaker, you can always pause/play or adjust volume via voice.

Overall, the Nest Audio is a fairly boring-looking object that easily blends into the background. Which I guess is the point. But it is bigger and denser than you might expect, standing taller than the super-sized Samsung Galaxy Note 20 Ultra, for example. 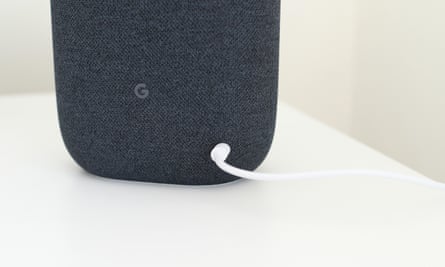 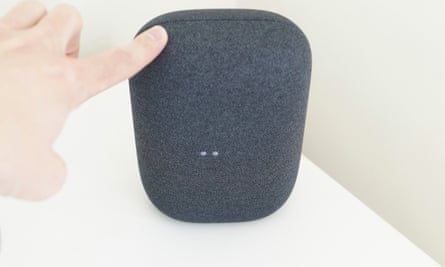 It is 75% louder with 50% more powerful bass than its predecessor but beyond the numbers it also sounds far better. While the original Home could get loud, it was a little muddy and not the highest of quality speakers. The Nest Audio is a vast improvement. It can easily fill a small room or kitchen. It was uncomfortably loud at anything from about 50% volume while sitting two metres from it.

It sounds pretty good with most music genres, with punchy and well-controlled bass and crisp treble. It is best at vocals, with warm and rich lyrics coming through loud and clear in all tracks, sometimes even a bit too strong. It sounds particularly good with pop-rock, such as the Spin Doctors, and with jazz, with Summertime by Louis Armstrong and Ella Fitzgerald benefiting from the strong lyrics.

It lacks really deep bass, struggling with John Martyn’s Small Hours or Lindsey Stirling’s Crystallize, and can lose a bit of crispness and detail with really complicated tracks such as the Who’s Baba O’Riley.

For those looking for something really special, it cannot beat a GBP199 Sonos One for real presence and nuance, and you won’t find yourself discovering new parts of well-worn tracks. The Nest Audio sounds really good for a speaker costing GBP90 – or likely less, once sales start.

You can create a wireless stereo pair of the Nest Audio but I only had one speaker in for test, so couldn’t try it. Multiroom audio works well with other Google speakers and moving audio around your house via voice worked well enough but you have to remember the names of speakers or groups – frankly, it’s easier done via an app on your phone. 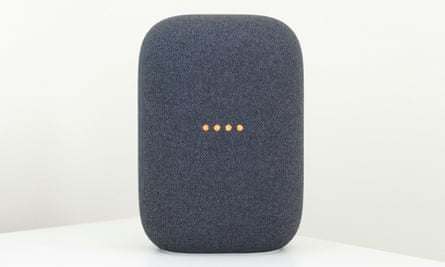 The Google Assistant is a highly capable voice assistant, capable of answering most questions, controlling most smart home appliances, tying in with your various Google services such as calendar and other personal information, and using a voice-match system to give individuals personalised answers based on their voice. Importantly, you can also change the voice it uses from female to male, unlike its rival Amazon Alexa.

The speaker’s three microphones had no problem hearing me over background noise, such as an extractor fan going full blast or the kettle boiling or when playing music at more than 50% volume. But its automatic “ambient IQ” volume adjustment system, which is meant to turn up to the volume of the Assistant when there is background noise, doesn’t work very well. It does increase the volume slightly but nowhere near loud enough to overcome the noises you find in the kitchen for instance.

It is also annoying that there is no way to set the Assistant’s volume separate from music. What is loud for music is not for the voice volume, which means you can sometimes not hear the response which gets old quickly. That’s a problem common to most smart speakers, not only the Nest Audio. You can adjust alarm and timer volume separately. 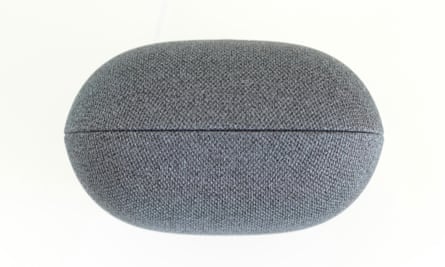 The use of more sustainable materials is part of Google’s commitment to include recycled materials in all its products launching from 2022. The company publishes environmental impact reports for some of its products, including the Nest Audio. Google will recycle all its devices free of charge.

The Google Nest Audio is only available in chalk or charcoal in the UK and costs GBP89.99.

The Nest Audio is a thorough sound upgrade for Google’s main smart speaker and is easily one of the best under GBP90.

It is louder with a fuller sound, more bass and better high tones. It also fills a room more effectively but is more directional – similar to a traditional speaker – rather than a round 360-speaker. That’s fine as most will put it in the corner of the room rather than the centre of it, while its fairly plain and soft, fabric design helps it blend into the background. It is also good to see the speaker is made from recycled materials.

Google Assistant continues to be the market leader in voice assistants, although recent advances by Amazon for Alexa look promising into next year. It is faster and can hear you just fine over loud noises but its new automatic volume adjustment feature doesn’t quite do enough.

If you just want a voice-assistant to answer questions and set timers, the Nest Mini is often less than half the price. But the Nest Audio is a good-sounding, good value Google Assistant smart speaker that brings Google back up to par with Amazon’s standard Echo. 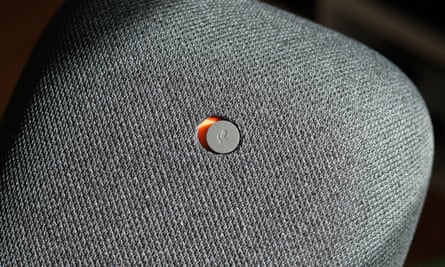