There were fears that this autumn’s bumper crop of books would see some titles overlooked – but one volume definitely didn’t get brushed under the carpet. This Is Me by Sophie Hinchliffe, better known as the Instagram cleaning sensation Mrs Hinch, was the runaway hit of Super Thursday on 1 October, fighting stiff competition from almost 800 other hardbacks published that day to top the UK charts and shift more than 90,000 copies in its first week.

It’s no surprise: Mrs Hinch’s three previous books have been bestsellers, and the 30-year-old comes with a readymade audience thanks to her “Hinch Army” of 3.8 million Instagram followers.

The subject matter is a shoo-in for success, too. Housework has recently been elevated from dreary chore to aspirational Instagrammable activity. (When photogenic, affluent women do it, at least.) Donning the Marigolds is no longer dowdy; cleaning is now cool.

Take the latest Netflix obsession, Get Organised with the Home Edit. Based around the wildly popular Instagram account of the decluttering duo Clea Shearer and Joanna Teplin, it sees them make over the houses of celebrities.

Although the pioneer of housework’s rebrand is the tidying expert Marie Kondo, Instagram has birthed a new generation of cleaning gurus. Mrs Hinch is by far the most popular in the UK, but other “cleanfluencers” include the self-appointed “Queen of Clean” Lynsey Crombie (209,000 followers); Gemma Bray, creator of The Organised Mum Method (204,000 followers) and Nicola Lewis of the home organising service This Girl Can Organise (148,000 followers). In the US, the likes of Ashley Jones Hatcher (21,000 followers) and Brittani Allen of interiors streamlining company Pinch Of Help (55,200 followers) share tips. 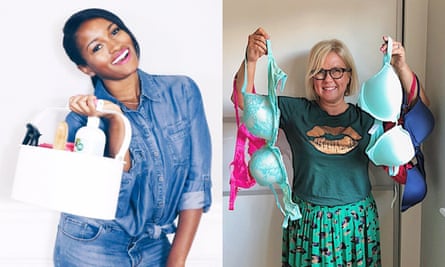 Lockdown accelerated the trend. “As we have been required to spend more time at home, we’ve all turned greater attention to the spaces we live in,” says Charlotte Hardman, Hinchliffe’s publisher at Michael Joseph. In practical terms, cleaning is more crucial than ever: a global pandemic is hardly the time to lower your hygiene standards, and working from home makes it harder to ignore that teetering pile of ironing (especially if the ironing board has been repurposed as your desk).

However, there was also a psychological motivation, says Lauren Bravo, who during lockdown wrote for the website Refinery29 about her pandemic housework frenzy. “There was something soothing about a menial task that could be seen through to completion. I found myself attacking the mould on our bathroom grouting with a toothbrush, really letting off steam andenjoying the banal sense of satisfaction when it made a difference,” she tells me. “I think that must be part of the appeal; a small, visible way to make something slightly nicer, when so much else is beyond our control.”

Public conversations about climate coincided with increased interest in sustainability in our private lives; for my own part at least, being shut indoors with all my possessions made me realise how much stuff I own and resolve to take better care of it.

Bravo, the author of How to Break Up with Fast Fashion, agrees that housework goes hand in hand with this. “I get huge satisfaction when I manage to remove an impossible stain (bicarbonate of soda is magic). It’s the feeling of rescuing something that might otherwise have been scrapped and wasted.”

Time to address the elephant in the room. Women have borne the economic brunt of the pandemic: mothers were more likely than fathers to lose their job during lockdown, according to research from the Institute for Fiscal Studies and the UCL Institute of Education, while the Office for National Statistics found that women did more unpaid labour than men each day. Against this, waxing lyrical about vacuuming feels problematic, Especially seeing as the trend is, inevitably, heavily female-dominated.

Bravo feared the solace she found in housework was underpinned by social conditioning. “How can we ever be sure we’re picking up the domestic mantle because we want to, not because of some internalised misogyny?” she wrote in her article. Elsewhere, feminists have expressed concerns that cleaning’s glossy new iteration glorifies the domestic sphere when women should be fighting for greater power in the public realm. 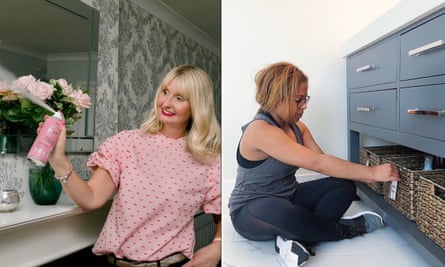 But there’s a difference between believing a woman’s place is in the home and simply trying to make cleaning more fun. Besides, the popularity of Mrs Hinch and co can be partly attributed to something separate from housework.

“What keeps her following growing is not just the cleaning tips but Sophie’s warm and down-to-earth personality,” says Hardman. Her ever-unfolding Instagram stories offer companionship: no matter how lonely or directionless your day, you’re one click away from her nattering soothingly about scourers or dishing up potato smileys for dinner with child-like excitement.

“Sophie is inundated with messages from followers who, like her, have struggled with anxiety or their emotional wellbeing, and who have found Sophie’s channels a welcoming and supportive environment to be in,” adds Hardman.

Chirpy videos of mundane activities are the order of the day with other cleanfluencers. Their lives are relatable (by Instagram standards, at least), and it doesn’t seem fanciful to apply their optimism to your own existence.

So, while there are compelling reasons at present for keeping surroundings hygienic, perhaps there’s more to the digital domestic goddess movement than an obsession with spotless surfaces. It offers a sense of community as well. Cleaning may have become cool – but only because good company never goes out of fashion.