Marvel’s Avengers: can the latest superhero game save us all?

Marvel’s Avengers ought to be a surefire winner. A third-person action-adventure game that puts you at the controls of a selection of beloved superheroes (six at launch, although to avoid spoilers we won’t specify which), it also boasts a multiplayer mode that will keep going long after the story is over – and will be constantly honed and expanded, Destiny-style.

Before release, the game generated controversy. Critics felt the beta test lacked variety and fans took umbrage with the superheroes’ total lack of resemblance to their cinematic counterparts. But Marvel’s Avengers turns out to have plenty of good points, and a strong single-player story.

It centres on a new superhero, Kamala Khan, initially glimpsed as a fangirl at A-Day, a huge Avengers event in San Francisco. The event goes disastrously wrong, resulting in a number of deaths, and leaving anyone with superpowers demonised as Inhumans. 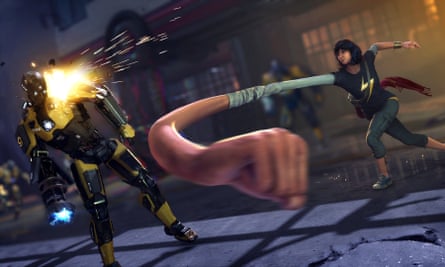 Flash forward five years, and AIM, a robotics-focused megacorp headed by George Tarleton (who as a SHIELD scientist previously worked with the Avengers) has managed to achieve totalitarian control of America. (Along the way, the game makes some uncomfortably recognisable points about the media acting as propagandists.) Kamala manages to hack some footage showing a glimpse of what really happened on A-Day, and sets out to find her beloved Avengers, now vilified and conspicuous by their absence.

Luckily, she has acquired powers of her own. As a super polymorph, her stretchable arms act as grappling hooks, her hands become wrecking balls in close combat and she can even temporarily grow to giant size. But she’s still a teenager, riven by self-doubt and low on confidence, and the story of how she catalyses the Avengers’ reassembly is riveting and cleverly told.

Some nagging doubts about the nature of this game creep into the single-player campaign. You’re introduced to several gear vendors, but not given enough resources to buy anything from them initially, unless you resort to spending real money on them. A confusingly large array of resources unfolds and the game makes it abundantly clear that once you enter its endgame, it will attempt to rinse as much extra cash out of you as possible.

Playing as the superheroes is great, though. When on the ground, Marvel’s Avengers’ gameplay is modelled on the Batman: Arkham games, requiring you to pull off combos of light and heavy attacks and counters, then wield chargeable superhero abilities at key moments. It doesn’t quite manage to achieve the elegance and flow of the Arkham games, but it gets close.

A certain amount of grinding is required to get the superheroes levelled up, equipped with the right gear (Marvel’s Avengers blatantly cribs Destiny 2’s gear system) and to unlock all their moves; you can achieve that through training sessions on the Avengers’ heli-carrier and through the chain of missions specific to each superhero, which also pad out the hours of play.

But when you get to the endgame, the grinding becomes tedious and the missions repetitive: you must put an awful lot of time into the game before acquiring the gear required to take on the multiplayer dungeons and missions, which are designed to be like Destiny 2’s Raids, but are in fact much less intricate and interesting.

Hopefully, Crystal Dynamics and the other developers working on Marvel’s Avengers hereafter will address the grinding problem with some judicious rebalancing. We’re promised a steady supply of new enemies, storylines, superheroes (Hawkeye is due soon), missions and game modes, and those can’t come soon enough. Right now, the single-player campaign is enough to justify buying Marvel’s Avengers, but even the staunchest Marvel fans will struggle to generate enthusiasm for what comes after. Thanks to great superhero combat, it has enough intrinsic quality to suggest that publisher Square Enix will be able to whip it fully into shape at some point in the future.