Suffering John Lewis stands at a crossroads on the high street

Twinkling lights are just visible behind screens where staff are putting the finishing touches to this year’s Christmas displays, but in other parts of the shop, the lights are still off. John Lewis’s flagship store in Oxford Street, central London, is bearing the scars of the pandemic.

A restaurant and cafe are closed and there are more staff than customers on the furnishings floor. The fashion floor is also a depressing sight, with tags flagging big discounts on racks of unwanted dresses and officewear. Last week it emerged John Lewis had applied for planning permission to convert entire floors of this shop into office space. It’s not hard to see why.

John Lewis, with its employee ownership and reputation for stellar customer service, still holds a special place in shoppers’ hearts. But while sister chain Waitrose, along with other supermarkets, has thrived in the pandemic, results published last week show the department store chain is in deep trouble.

Huge changes in shopper behaviour, which have been accelerated by coronavirus, mean the John Lewis website is now responsible for 60% of the chain’s sales – up from 30% pre-Covid. This tilt towards the web means the department stores, as properties, are now deemed to be worth nearly GBP500m less than before – a reassessment in last week’s results that sent the group crashing GBP635m into the red in the first half of its financial year.

The John Lewis Partnership’s newish chairman, Dame Sharon White, also had the unenviable task of telling staff that for the first time in 67 years they would not receive their prized annual bonus – and perhaps not for several more years – as she tries to bring about a recovery in profits.

John Lewis prides itself on practising a different, better kind of capitalism. Its constitution makes clear that its ultimate purpose is the “happiness of all its members, through worthwhile and satisfying employment in a successful business”. 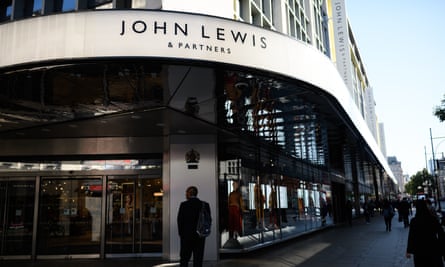 But with the company now on track to make its first annual loss since it was set up in 1920, it is testing the definition of “successful”, and few workers are likely to be happy at the loss of a bonus that has made up at least 10% of their salary in seven out of the past 10 years.

The problems are not of White’s making: she inherited a troubled business from her predecessor, Sir Charlie Mayfield. But analysts worry that the career civil servant, who has no previous retail experience, is too eager to retreat from the core business of shopping – not least because she is understood to be considering a string of new ventures including garden centres, financial services and even social housing.

“I think they’ve lost sight of what they are and who they are,” says Richard Hyman, an independent retail analyst. “JLP as a social enterprise is something Sharon White has found very easy to fall in love with. But without being good commercially there is no social enterprise. They are a retailer first. Everything else comes second. They mustn’t dabble.”

John Lewis is not the only department store to face challenges. It is clearly doing better than rivals Debenhams, House of Fraser and Beales, all of which have fallen into administration.

Sales at the chain sank by 10% to GBP1.9bn in the first half of the year – a creditable performance given that all stores were closed for several months. But the division’s operating profits nearly halved to GBP153m, before central costs such as IT, property and logistics, which are now shared with Waitrose, were taken into account.

The chain’s survival will involve tough decisions – on its store estate and price position, the range of products it stocks and the services it offers.

White is already moving quickly. In July, John Lewis said eight of its 50 outlets, including its sprawling Birmingham branch, would not reopen after the lockdown. More than half the stores closing are smaller, home-only branches, and all were struggling to make a profit, so most analysts welcomed the move.

But the closures come at a time when John Lewis looks to be the last man standing among the mass-market department store chains. Some argue it should take advantage of a dive in rents during the crisis to grab a bigger share of the market.

“We had too many department stores in this country but that’s no longer the case,” says one former senior John Lewis staffer. “The only structural weakness of department stores is the cost of rent and the cost of business rates, and this is the first time in 20 years where you can seize control of it. If you want to open a store in Westfield tomorrow they’ll give it to you rent-free, if you pay the business rates. I’m not talking about being aggressive: these deals are available for good, big retailers who are anchors.

“It’s a dangerous time for profitable retailers to be shutting stores when they could switch to turnover rents,” the staffer continued. “The departments stores take between GBP40m and GBP100m – that is a lot of turnover to lose when there are things that could be done in the short term to make them more profitable.” 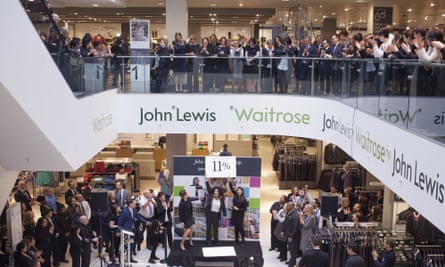 Pippa Wicks, John Lewis’s new department store supremo, said that shops remained important but that the partnership would seek to put unprofitable space to better use. It would “continue to invest in stores that perform”, she added, with projects planned at London’s Peter Jones store as well as in Sheffield and Edinburgh.

Within those branches, and others, it is likely there will be changes to how space is allocated. Older stores have far too much storage space: that could be hived off for rent or sale to other operators, such as gyms, or used for housing projects, office space or other activities that are expected to see a return in demand once the pandemic is over.

Less space is likely to be devoted to fashion – where sales dived 28% in the half-year – and more to home furnishings and services such as personal or home styling. Wicks suggested John Lewis also wanted to introduce cheaper products and to review its “never knowingly undersold” price promise. She hinted the expensive pledge would be replaced by a broader promise of good value as the UK heads into tough economic times.

More services and brand partnerships that can link the fast-growing online world to that of the physical store are also likely. Already John Lewis has laid itself out as a high street window for online specialists such as furniture brands Swoon and Loaf and fashion site Hush. But it is also experimenting with partnerships with innovative companies such as furniture rental firm Fat Llama.

There are rumours that John Lewis is also reconsidering its plan to increase its sales of own-label goods – like fashion brands.

Kin and Modern Rarity. But that could put further pressure on profits and open the group to being undercut by rivals on brands that can be easily price-compared online.

Certainly, stores could be more exciting to appeal to younger shoppers. Moira Clark, professor of strategic marketing at Henley Business School, says John Lewis’s branches are guilty of being “bland and conventional”. That’s not a ticket for survival.